Valdez and La Viña were informed by the Office of the Executive Secretary that their services were being discontinued immediately. This was disclosed by Presidential Spokesperson Harry Roque.

“Considering that your term of office expired on June 30, 2017, and that you have since been serving in the SSS in a holdover capacity, we may inform you that, upon instructions from the President, your service in the SSS is hereby discontinued immediately,” Roque quoted the OES letter to Valdez.

Roque added that the President is yet to decide on the replacement of the two.

In his speech during a mass oath-taking of new government officials last February 13, President Duterte has accused the SSS officials of misusing taxpayer’s money.

“The latest of those who really who were abusing the use of public funds…CHED, MARINA, the guys responsible for the moorings there of the ships, and many others including the SSS,” said Duterte.

Meanwhile, Roque thinks that the President’s move was aimed to resolve the rift in the SSS Board to make the state fund more efficient.

Last year, La Viña made headlines after calling out four SSS officials of illegally profiting by trading stock markets for their personal accounts, and accusing 20 others of approving Php143 million worth of media contracts which were deemed anomalous.

Meanwhile, the SSS employees union sent a petition to the President asking for the dismissal of La Viña last month. They alleged that La Viña demoralized SSS employees after making public his accusations against SSS officials.

La Viña served as the president’s legal counsel during the May 2016 elections before being appointed as SSS commissioner. 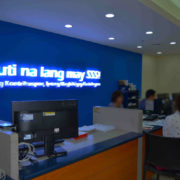